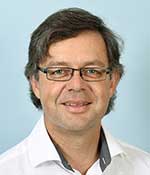 
"For pioneering numerical work in many seemingly intractable areas of quantum many body physics and for providing efficient sophisticated computer codes to the community."


Matthias Troyer received his diploma in physics in 1991 and his Ph.D. in physics in 1994 from ETH Zurich, Switzerland. After a postdoctoral year at ETHZ, he spent three years as postdoc at the University of Tokyo before returning to ETHZ initially as lecturer and since 2005 as full professor of computational physics. Working on the interface between physics and computational science he has made contributions to quantum phase transitions in quantum magnets, supersolidity of bosons, strongly correlated electrons, ultracold quantum gases and the development of simulation algorithms for quantum many body systems. To make modern simulation methods accessible to a broader community he initiated the open-source ALPS project. His interest in advanced high performance computing systems has recently led him towards the testing and development of quantum devices and on the optimization of quantum algorithms. He has won a gold medal at the International Chemistry Olympiad in 1986, received the medal of ETHZ for an excellent doctoral thesis in 1994 and was awarded and ERC Advanced Grant in 2012. He is a Fellow of the APS and currently serves as Member and Trustee of the Aspen Center for Physics.