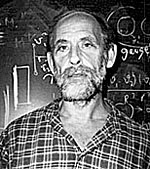 In his own view, Dr. Susskind states his most important research contributions have been:

Dr. Susskind is a recipient of the Pregel Award from the New York Academy of Science, and is a member of the American Academy of Arts and Sciences.