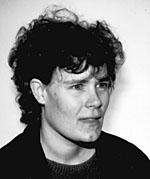 
"For her pioneering measurements of nonlinear coherent phenomena in high-energy hadron beams, building upon the rich theoretical development in plasma physics over the last several decades. Her findings include the identification of three-wave interactions in beams, and a related phenomenon, echoes, which provides a means to detect extremely weak diffusive processes at work in the beam. Her work serves as a starting point for the understanding of saturation and turbulent states in high-energy synchrotrons."


Dr. Linda Spentzouris received her BA in physics from Colorado College in 1979. During the intervening years between her undergraduate degree and entering graduate school, she worked in the Operations Group of the Accelerator Division at Fermilab. She received her Ph.D. in physics from Northwestern University in 1996. The subject of her dissertation was coherent nonlinear longitudinal phenomena in unbunched synchrotron beams. These phenomena include the weakly nonlinear three-wave coupling processes of parametric coupling and beam echoes, as well as moderately nonlinear wave-particle interactions. She has recently been hired as a Research Associate by Fermilab, to work on a high intensity photoelectron source now under construction. The source will be used as a proto-type injector for the Tesla Test Facility. Experiments at Fermilab are planned which will use this source as a driver for a plasma-wakefield advanced accelerator.