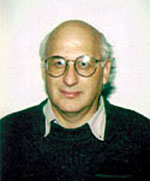 
"For fundamental contributions to the understanding of non-perturbative QCD, non-leptonic weak decays, and the analytic properties of supersymmetric gauge theories."


Dr. Shifman is a native of Riga, Latvia, when it was part of the Soviet Union. His family then moved to Ukraine and then to Moscow in 1952. In 1966 he became a student of Moscow Institute for Physics and Technology in Dolgoprudny. He began his Masters work in 1969 and received his Ph.D. in 1976 at the Institute of Theoretical and Experimental Physics. While there he studied under B.L. Ioffe, V. I. Zakharov and Arkady Vainshtein. He remained at the Institute until 1989.

Dr. Shifman writes:
"The late eighties were very hard for me. I could not reconcile high expectations brought by Gorbachev's perestroika with the surrounding reality. In 1989, I was allowed for the first time ever, to travel to the West with my family (my daughter had to stay in Moscow, though). I spent this academic year at Bern University, where I made the decision to move to the United States. Since 1990, I have been a Professor of Physics at the University of Minnesota. My scientific interests are focused around quantum chromodynamics in the broadest sense of the word. This is my first love from the days of its inception in 1973 and my major occupation at present."

Dr. Shifman is a Fellow of the American Physical Society. Click here for a link to a paper presenting Dr. Shifman's work in the 1970's and 1980's.