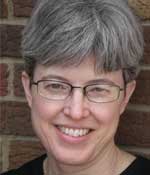 
"For significant contributions to the understanding of ultra-peripheral relativistic heavy ion interactions, skill in involving undergraduates in a large experimental research collaboration, and successful mentoring of undergraduates at her institution."


Janet Seger is Professor and Chair of the Department of Physics at Creighton University. She earned her B.S. in Physics from Grinnell College in 1985, and her Ph.D. in Physics from the University of Wisconsin-Madison in 1991. She joined the faculty of Creighton University in 1991. She is a member of the international STAR collaboration, which studies relativistic heavy ion collisions at RHIC. Her research focus, supported by the DoE and DoE-EPSCoR, is the study of ultra-peripheral heavy ion collisions. These collisions, where the impact parameters are large enough that long-range electromagnetic interactions dominate, allow the study of photon-induced interactions in a nuclear environment.Professor Seger has actively involved undergraduates, including several non-physics majors, in the study of ultra-peripheral collisions at STAR. Her students routinely present their work at national conferences. Professor Seger's present and past memberships include the American Physical Society, the American Association of Physics Teachers, the Council on Undergraduate Research, Project Kaleidoscope, and Sigma Xi.