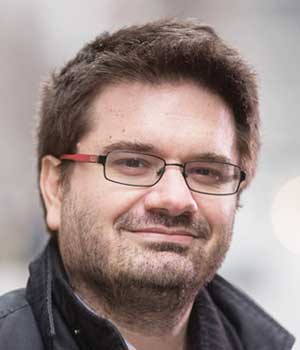 
"For sustained leadership and service to the international physics community, in particular for developing global collaborations through projects and networks in China, Mexico and several African countries, and for exceptional mentoring efforts."


Federico Rosei directs the INRS Centre Énergie, Matériaux et Télécommunications in Québec, Canada, where is also a tenured professor. He holds the UNESCO Chair in Materials and Technologies for Energy Conversion, Saving, and Storage since 2014, and has been the institute’s senior Canada Research Chair in Nanostructured Materials since 2016. He received his materials science degree and Ph.D. from the University of Rome “La Sapienza” in 1996 and 2001, respectively.

Dr. Rosei has published over 285 articles in international journals including in Science, Nature Photonics, PNAS, Advanced Materials, Advanced Functional Materials, Advanced Energy Materials, and many others. He has been an invited speaker at more than 300 international conferences, has given over 230 seminars and colloquia, nearly 60 professional development lectures, and 40 public lectures in 45 countries on all inhabited continents. His publications have been cited over 10,600 times, and his H index is 53.