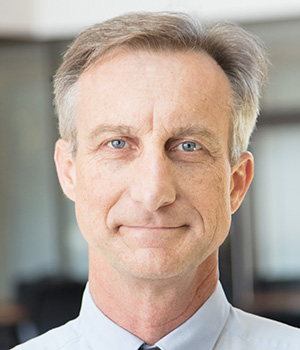 
"for his essential contribution to the exploration of atomic nuclei beyond the neutron drip line and his conception and continued leadership of the Conference Experience for Undergraduates program."


Warren F. Rogers earned a B.S. in physics from Harvey Mudd College, an M.A. and Ph.D. in physics from University of Rochester, and conducted post-doctoral research at the University of Washington. He served on the physics faculty for six years at SUNY Geneseo, 22 years at Westmont College, where he was also interim provost for two and a half years, and since the fall 2016, has been the Blanchard Chair of Physics at Indiana Wesleyan University. Areas of his research include ground state magnetic moment measurements using beta-NMR spectroscopy; nuclear excited state magnetic moment measurements using transient field spectroscopy; measurements of unbound states in neutron-rich nuclei using the MoNA-LISA neutron detector arrays and the Sweeper Magnet at National Superconducting Cyclotron Laboratory at Michigan State University. He is one of the founding members of the MoNA collaboration, and has advised and mentored undergraduate students in research throughout his career. At least 22 of his students have earned advanced STEM degrees, including 12 Ph.D.’s. In 1998, Rogers designed and organized the first Conference Experience for Undergraduates (CEU), held concurrently for 18 consecutive years with the fall Division of Nuclear Physics meeting. To date, over 2,000 undergraduate students have participated in the program. Rogers is a fellow of the American Physical Society, and in 2009 he received the Division of Nuclear Physics Distinguished Service Award.