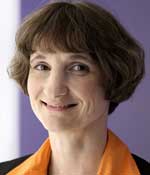 
"For seminal achievements in the science and technology of nanoscale electronics, particularly the exploration of novel materials such as semiconducting nanowires, molecules and organic materials for future nanoscale devices, and outstanding presentations and outreach for general audiences."


Heike E. Riel, Ph.D., is the director of the Physical Sciences Department at IBM Research in Zurich, Switzerland, where she is responsible for IBM`s worldwide Physical Science research strategy. In 2013, Dr. Riel became an IBM Fellow, achieving the company’s highest technical distinction, and became a member of the IBM Academy of Technology. Her research interests include nanoscale materials and novel device concepts for applications in electronics, optoelectronics, and energy harvesting. Dr. Riel studied physics at the Friedrich-Alexander University of Erlangen-Nuremberg (Germany), received her Ph.D. in 2003 from the University of Bayreuth (Germany) for her work on the optimization of multilayer organic light-emitting devices. After an internship at the Hewlett-Packard Research Laboratory in Palo Alto, California, she joined IBM Research Zurich in 1997, first as a diploma student, then as a Ph.D. student before becoming a Research Staff Member in 2003. From 2008 to 2014, Dr. Riel led the Nanoscale Electronics Group before moving to the Materials Integration and Nanoscale Devices group. In 2003, Dr. Riel was named as one of the world’s Top 100 Young Innovators by MIT Technology Review. Since then, she has gone on to receive the Applied Physics Award from the Swiss Physical Society, and the Swiss Association of Women in Engineering Innovation Award. In 2015 Dr. Riele was elected to the Swiss Academy of Engineering Sciences, to the Leopoldina, and to the German National Academy of Sciences. In 2016 she was awarded an honorary doctorate from the Faculty of Engineering at Lund University (Sweden).