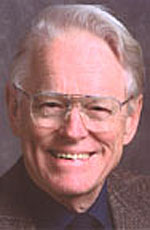 
"For his development of innovative infrared techniques and pioneering research in far-infrared spectroscopy."


Professor Richards received his Bachelor's degree from Harvard in 1956, his Ph.D. from the University of California at Berkeley in 1960, was a postdoctoral fellow at Cambridge University (England) in 1959-60, joined the technical staff of the Bell Telephone Laboratories in 1960, and the physics faculty at Berkeley in 1966. He has been a visiting scientist at Cambridge University, the Max Planck Institutes for Solid State Physics at Stuttgart and Radio Astronomy at Bonn, the Ecole Normale Superieure in Paris, the Paris Observatory, and the University of Rome. With students and collaborators, he has published more than 300 papers on far infrared and millimeter wave physics, including the development of measurement techniques, especially new detectors, and the application of these techniques to many problems in condensed matter physics and astrophysics.

Professor Richards is a member of the National Academy of Sciences and the American Academy of Arts and Sciences. He has received fellowships from the Alexander von Humboldt Foundation, the J. S. Guggenheim Memorial Foundation, and twice from the Adolph C. and Mary Sprague Miller Institute for Basic Research in Science. He was named California Scientist of the Year in 1981, and Berkeley Faculty Research Lecturer in 1991. He received the Button Prize of the Institute of Physics (UK) for Outstanding Contributions to the Science of Electromagnetic Spectrum in 1997.