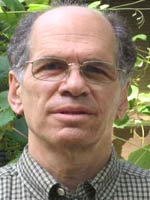 
"For demonstrating that the parallel Ohm's law in axisymmetric toroidial plasmas with impurities is governed by Coulomb collision processes, including neoclassical resistivity and the bootstrap current."


Stewart C. Prager received his Ph.D. from Columbia University in 1975, and Bachelor degrees in 1970 from both Columbia (electrical engineering) and Queens College, New York (liberal arts). Following two years at General Atomics (1975-1977), he joined the faculty at Wisconsin, where he is now a professor of physics. He currently directs both the MST experiment in plasma physics and fusion research, and the Center for Magnetic Self-Organization in Laboratory and Astrophysical Plasmas, a multi-institutional center supported under the NSF Physics Frontier Centers program. His research focuses on basic plasma physics, fusion plasma physics (particularly magnetic confinement) and, recently, connections between lab and astrophysical plasmas.