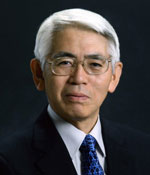 
"To Robert Meservey, Terunobu Miyazaki, Jagadeesh Moodera and Paul Tedrow for pioneering work in the field of spin-dependent tunneling and for the application of these phenomena to the field of magnetoelectronics."


Terunobu Miyazaki, was born in Saitama Prefecture in 1943. He received B.S and M.S. and PhD. In Applied Physics at Graduate School of Engineering, Tohoku University in 1967, 1969 and 1972, respectively. From 1973 to 1975 he was a research associate and a Humboldt research fellowship at university of Regensburg, Germany. He worked as a professor at Tohoku University from 1991 and retired in March 2007. He has been a professor at WPI Advanced Institute for Materials Research, Tohoku University since November 2007. His research fields include magnetism and magnetic materials. Especially he is interested in search of new functionalized magnetic materials, namely spin-electronic materials. He currently participates in the NEDO Spintronics Nonvolatile Device Project. He was awarded the following scientific prizes: " Magnetic Society Japan (MSJ) Distinguished Paper Award (1997) " MSJ Society Award (2003) " Yazaki Scientific Prize (2003) " Yamazaki-Teiichi Prize (2005) " Prize for Science and Technology by Minister of Education, Culture, Sports and Technology of Japan (2006) " MSJ Distinguished Publication Award (2006) " Fellow, Applied Physics, Japan (2007) " Asahi Prize (2008) " MSJ Distinguished Paper Award (2008)