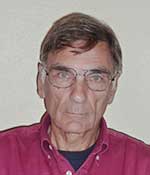 
"For their contribution to a comprehensive classification of topological defects in condensed matter phases with broken symmetry, culminating in the prediction of half-quantum vortices in superfluid He-3 and related systems."


V. Mineev graduated from Moscow Institute of Physics and Technology in 1969. He defended his PhD Thesis (1974) and Doctor of Science Degree (1983) in Landau Institute for Theoretical Physics. Moscow, Soviet Union.

During 1992-1999 V. P. Mineev was Vice-director of the Landau Institute and at the same time Professor and Head of Chair « Problems of Theoretical Physics » in Moscow Institute of Physics and Technology. Since 1999 till the present time he is Senior Researcher in Commissariat a l’Energie Atomique, Grenoble, France. V. P. Mineev is recipient of L. D. Landau prize of Russian Academy of Sciences (together with G. E. Volovik, 1992). He is author of books « Topologically Stable Defects and Solitons in Ordered Media » (1998) and « Introduction to Unconventional Superconductivity » (in co-authorship with K. V. Samokhin, 1999). V. P. Mineev is Member of APS.

Main directions of the scientific activity at present are related with unconventional superconductivity in ferromagnetic compounds and noncentrosymmetric metals.