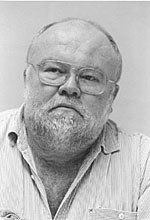 
"For his outstanding efforts in helping to restore evolution and cosmology to their proper place in the K-12 scientific curriculum. As both a distinguished cosmologist and respected member of the clergy, he played a key role in helping the people of Kansas reverse their State Board of Education's anti-science action."


Adrian Melott is currently Professor of Physics and Astronomy at the University of Kansas. He received an M.Div. from Starr King School for the Ministry in Berkeley, CA in 1971 and was for 7 years minister in a Unitarian Universalist church. He received his Ph.D. in physics at the University of Texas in 1981, and has pursued research in physics at the Universities of Chicago, Oxford, UC Santa Barbara, Moscow, and Cambridge. His research emphasis is the use of supercomputers to do massive simulations of the formation of structure in the Universe. Recently, he has become interested in uncovering correlations between the properties of objects on supercluster scales--separated by up to 100 million light years. In 1996 he was named a Fellow of the American Physical Society "For groundbreaking studies of the origin and evolution of cosmic structure." He is a founding Board member of Kansas Citizens for Science, and in 2001 received the Steeples Award from the University of Kansas for his public outreach activities in science. He recently co-authored a Sunday school curriculum "Celebrating Our Origins in the Universe", which introduces the ideas of the Big Bang and the evolution of life to elementary school age children.