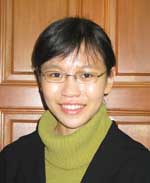 
Huanqian Loh's thesis work, conducted in Vladan Vuleti's laboratory, focused on the realization of a high-brightness photon pair source and its applications for interferometry and entanglement. Such a narrowband source, based on an atomic sample collectively coupled to an optical cavity, is particularly important for quantum information storage. Specifically, Huanqian collected the first sets of data demonstrating the generation of photons as pairs, strongly correlated in a non-classical way. Her work has led to a Science paper, of which she was a co-author. In addition, she applied the photon pairs to interference experiments that can potentially achieve sub-shot noise precision, and also entangled the polarizations and arrival times of the photon pairs.

Huanqian received her BS from MIT in 2006. Upon graduation, she received the Malcolm Brown Cotton Award, given to a physics major for outstanding scholastic achievement. She was also inducted into Phi Beta Kappa and Sigma Pi Sigma. Currently, she is employed by the Agency for Science, Technology and Research (Singapore) and works in a quantum optics laboratory. She intends to pursue an experimental atomic physics PhD in the US, starting in Fall 2007.