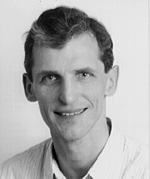 "For achieving Bose-Einstein condensation of an atomic gas, for creating techniques for studying the Bose condensate, and for measuring the physical properties of the weakly interacting atomic Bose gas."


Dr. Ketterle received the equivalent of his Master's degree from the Technical University of Munich, Germany in 1982 and His Ph.D. from the University of Munich in 1986. After postdoctoral work in molecular spectroscopy at the Max-Planck Institute for Quantum Optics in Garching and in combustion diagnostics in Heidelberg, he went to MIT in 1990 as a research associate. In 1993 he joined the faculty at MIT as Assistant Professor of Physics.

Dr. Ketterle's research is in atomic physics and laser spectroscopy. His group is working on novel methods to slow, cool and trap atoms with the goal of exploring novel aspects of ultra cold atomic matter. After the realization of Bose-Einstein condensation, he is now focusing on the study of quantum-degenerate gases and the development of an "atom laser".

Dr. Ketterle is a member of the American and German physical societies. His awards include the Michael and Philip Platzman Award (MIT, 1994), a David and Lucile Packard Fellowship (1996) and the Gustav-Hertz Prize of the German Physical Society (1997).