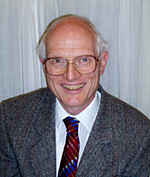 
"For his pioneering studies of the theory of ultracold atomic collisions, and its applications to precision metrology and quantum gas dynamics."


Julienne earned a B. S. in chemistry from Wofford College, Spartanburg, SC, in 1965, and a Ph.D. in chemical physics from the University of North Carolina at Chapel Hill in 1969. He worked with Frederick Mies as a National Research Council Postdoctoral Research Associate at the National Bureau of Standards (NBS) from 1969-1971. He worked with the Plasma Physics Division of the Naval Research Laboratory from 1972-1974. He returned to NBS (now NIST, the National Institute of Standards and Technology) in 1974 as a member of the Quantum Chemistry Group, and later became Group Leader of the Quantum Processes Group in the Atomic Physics Division of the NIST Physics Laboratory.

His research interests are in theoretical atomic and molecular physics. Application areas prior to 1986 were primarily to atmospheric and astrophysical phenomena, laser physics, and collisions in light fields. Research after 1986 has centered on cold atom collisions and their role in photoassociation spectroscopy, cold molecule formation, quantum degenerate gases, atomic clocks, and quantum information. He is a NIST Fellow, a Fellow of the American Physical Society, and has won the Department of Commerce Bronze, Silver, and Gold Medals.