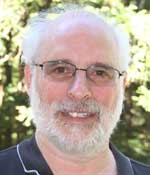 
Howard E. Haber, Ph.D., received S.B. and S.M. degrees in physics from the Massachusetts Institute of Technology (Cambridge) in 1973, and a Ph.D. from the University of Michigan (Ann Arbor) in 1978. Dr. Haber did his postdoctoral work at the Lawrence Berkeley Laboratory in Berkeley, California, the University of Pennsylvania (Philadelphia), and the University of California, Santa Cruz. After receiving the Department of Energy Outstanding Junior Investigator Award in 1985, Dr. Haber joined the UCSC physics faculty, where he is currently a Distinguished Professor of Physics. He was elected fellow of the American Physical Society (APS) in 1993, and served as secretary-treasurer of the Division of Particles and Fields of the APS from 2013 to 2015. In 2009, Dr. Haber received an Alexander von Humboldt Research Award, in a ceremony hosted by the University of Bonn (Germany). He is a co-author of the "Higgs Hunter’s Guide” (Westview Press), first published in 1990. Dr. Haber’s work is predicated on his conviction that the path to physics beyond the Standard Model (SM) is critically connected to Higgs physics. His current focus is on the theory and phenomenology of extended Higgs sectors. Dr. Haber is currently exploring the so-called alignment limit in which the properties of one of the scalar states approximate those of the SM Higgs boson, as suggested strongly by the initial Large Hadron Collider Higgs data.