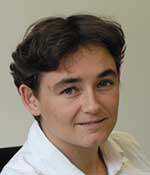 
"For discovering new types of black holes in higher dimensions, and giving us a deeper understanding of scattering amplitudes in quantum field theory."


Henriette Elvang received her B.Sc. and M.Sc. from the Niels Bohr Institute in 1998 and 2001, and her Ph.D. in physics from the University of California Santa Barbara in 2005. She was a Pappalardo postdoctoral fellow at MIT from 2005 to 2008 and spent one year as a postdoc at the Institute for Advanced Study in Princeton. Elvang joined the faculty at the University of Michigan in 2009. Her current research is on the interface of field theory, gravity, and string theory, with focus on advancing the understanding of the fundamental properties of these important frameworks for physics. Elvang received an NSF Career Award in 2010 and a Cottrell Scholar Award from the Research Corporation for Science Advancement in 2013. She also received a 2014 Individual Award for Outstanding Contributions to Undergraduate Education and a 2015 Henry Russel Award from the Rackham Graduate School, from the University of Michigan.