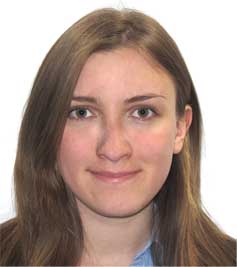 
Yuliya Dovzhenko received a BA in physics with high honors from Princeton University in 2012, along with a Certificate in Applications of Computing.  Her interests include condensed matter physics and quantum computation. While at Princeton, she conducted research in Prof. Jason Petta's lab, focusing on quantum control of semiconductor quantum bits.

Yuliya’s project investigated quantum coherence of a single charge trapped in a gallium arsenide double quantum dot. She demonstrated coherent multi-pulse control of a semiconductor charge qubit, which is an essential requirement for performing dynamic decoupling to battle charge noise. She also worked on developing spin qubit devices in silicon/silicon-germanium heterostructures, which can be isotopically purified to eliminate the hyperfine interaction. Yuliya’s work resulted in four publications, including two rapid communications in Physical Review B. She is the recipient of the Kusaka Memorial Prize in Physics from Princeton University.

Yuliya is currently working towards a PhD in physics at Harvard University. Her research concerns quantum computation using spins of nitrogen-vacancy centers in diamond.