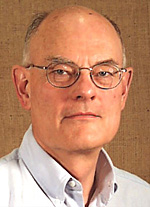 
"For his sustained and productive research in molecular beam spectroscopy and an extraordinary record of spurring interest in careers in physics through student participation in challenging experiments."

The current research project at St. Olaf College began with the acquisition of an electronic resonance molecular beam spectrometer from Norman Ramsey's laboratory at Harvard in 1981. Since then it has been used to study the hyperfine spectra of molecules including KC1, NaBr, KF, KOH, LiF, LiI, RbF, RbC1, and RbBr. The spectrometer, with its 2-m long transition region, produces linewidths of 100-200 Hz for pure hyperfine transitions ranging in frequency for these molecules up to 65 MHz. Resonance lines can be fitted to a Rabi lineshape to allow determination of the frequencies to a precision on the order of 1 Hz. With this precision we have been able to resolve the nuclear quadrupole, nuclear spin-rotation, and spin-spin interactions and their dependence on vibration and rotation state. We hav used these to determine the ratio of the nuclear quadrupole moments of the two isotopes of Li, and one of the two isotopes of Rb, the electric dipole moment of KOH, and have seen some evidence for magnetic octupole and electric hexadecapole interactions in NaBr and LiI. A total of 65 undergraduate students have participated in the project over these 20 years.