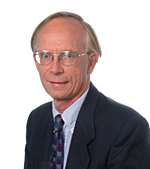 
"For his profound and original applications of conformal invariance to the bulk and boundary properties of two-dimensional statistical systems."


Cardy received his BA in mathematics in 1968 and PhD in theoretical physics in 1971 from Cambridge University. After postdoctoral studies at CERN, Geneva and the University of California, Santa Barbara, he joined the faculty at Santa Barbara in 1977. In 1993 he moved to Oxford University, where he is a Senior Research Fellow at All Souls College and a Professor of Physics. His research prior to 1978 was in particle physics, in particular the study of high-energy diffraction scattering. After this, he applied methods of quantum field theory and the renormalization group to condensed matter, especially to critical phenomena in bot, h pure and disordered equilibrium and non-equilibrium systems. In the 1980s he helped develop the theory of conformal invariance and its applications to these problems, ideas which also had an impact in string theory and quantum gravity. Cardy is a Fellow of the Royal Society and a recipient of the 2000 Dirac Prize of the Institute of Physics.