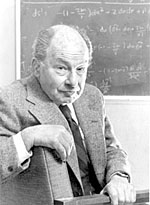 
March 24, 1915 -October 19, 2002 Peter G. Bergmann was born in Berlin. At age 21, he received his Ph.D. with Professor Philipp Frank from the German University in Prague. From 1936 to 1941, he collaborated with Albert Einstein at the Institute for Advanced Studies. A fruit of their collaboration was the paper "On a Generalization of Kaluza's Theory of Electricity." He also wrote his first book, the now classic "Introduction to the Theory of Relativity," from which generations of physicists learned the subject in depth.

From 1941-1944, Professor Bergmann taught at Black Mountain College and at Lehigh University. From 1944-1947, he was engaged in war research on underwater sound at Columbia University and the Woods Hole Oceanographic Institution.

In 1947, he took a position at Syracuse University. Here together with his students and coworkers he began a research program to construct a quantum theory of relativity. He helped found the International Committee for General Relativity and Gravitation and the Texas Symposia on Relativistic Astrophysics.

Peter Bergmann retired from Syracuse University in 1982 and became a Research Professor at NYU. Shortly before his death, he was pleased to hear that he would be sharing the Einstein Prize with Professor John Whee