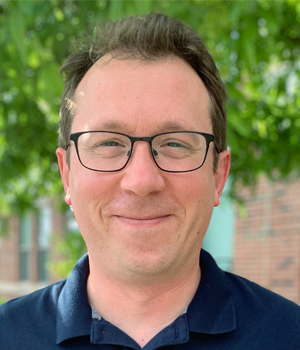 
"For the development of a high-fidelity, versatile numerical methodology to simulate flow of deformable blood cells in dense suspension through highly complex geometries, and for providing insights to the physics of blood flow in physiologically realistic microvascular capillary networks."


Peter Balogh received his BS in mechanical engineering from the University of Notre Dame in 2004. He worked in industry until 2012 analyzing fluid/thermal systems of power plants, including water/steam flow phenomena and dynamic flue gas events. He received his Ph.D. in mechanical engineering from Rutgers University in 2018, working under Prosenjit Bagchi. His work was in the area of bio-fluid dynamics, and he developed a method for simulating cellular-scale blood flow through highly complex geometries such as complex vessel networks and intricate microfluidic devices. He won the New Jersey Space Grant Consortium Graduate Research Award, and the Rutgers School of Graduate Studies Conference Travel Award. Presently he is a postdoc with Amanda Randles at Duke University. His research is focused on modeling cancer cells and their transport in large-scale geometries, and on investigating the remodeling of tumor vasculatures through comparisons with in vitro experiments. He has published in journals such as the Journal of Computational Physics, Physics of Fluids, the Biophysical Journal, and the Journal of Fluid Mechanics. His work appeared on the cover of the Biophysical Journal, was selected as a Feature Story for the Texas Advanced Computing Center, and has been featured in the press for the National Science Foundation. Peter is a member of APS, as well as BMES and ASME. He has taught undergraduate classes on fluid mechanics, as well as computational methods in science and engineering.