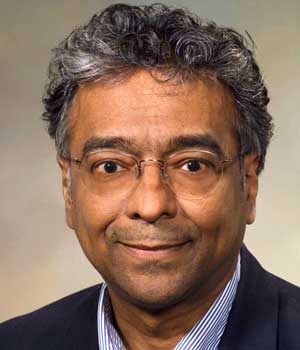 
"For numerous and seminal contributions to general relativity, including the theory of black holes, canonical quantum gravity, and quantum cosmology."


Abhay Ashtekar directs the Institute for Gravitation and the Cosmos, and is the Evan Pugh Professor of Physics and holder of the Eberly Chair at Penn State. He received his Ph.D. in physics from the University of Chicago in 1978. He has authored or co-authored over 270 scientific papers and written or co-edited nine scientific books on general relativity, cosmology and quantum gravity. His research has advanced our understanding of the asymptotic structure of space-time, gravitational waves in full nonlinear general relativity, atomic structure of space-time geometry on the Planck scale, and the quantum nature of black holes and Big Bang. His reformulation of general relativity as a gauge theory has led to loop quantum gravity, an approach to the unification of general relativity and quantum physics that is now being pursued in dozens of research groups worldwide. He has continued to play a seminal role in the development of this field as well as its subfield, loop quantum cosmology. Ashtekar is a member of the National Academy of Sciences, and is one of only 51 honorary foreign fellows of the Indian Academy of Sciences. He was awarded the senior Forschungspreis by the Alexander von Humboldt Foundation and has held the Krammers Visiting Chair in Theoretical Physics at the University of Utrecht, Netherlands; a Senior Visiting Fellowship of the British Science and Engineering Research Council; and the Sir C. V. Raman Chair of the Indian Academy of Science. He was awarded Doctor Rerum Naturalium Honoris Causa by the Friedrich-Schiller Universitaet, Jena, Germany in 2005 and by the Universite' de Aix-Marseille II, France in 2010. He is a past president of the International Society for General Relativity and Gravitation, and a past chair of what is now the Division of Gravitational Physics of the American Physical Society.