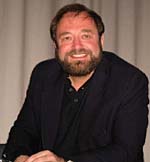 
"For fundamental contributions to the understanding of the quantum mechanics of electrons in random potentials and confined geometries, including pioneering work on the interplay of interactions and disorder."


Boris Altshuler was born on January 27, 1955 in Leningrad (now St. Petersburg) Soviet Union (now Russia). In 1970 he started his undergraduate studies at the Physics Department of Leningrad State University (which also changed its name accordingly) and received his Diploma, which is roughly equivalent to the Master's degree in the USA, in 1976. The same year Altshuler became a graduate student at the Leningrad Institute for Nuclear Physics. Altshuler received his Ph.D. there in 1979 and continued to work at that Institute until 1989 as first Junior Research Fellow and later as a Senior Research Fellow. In 1989 he moved to the USA and joined the faculty of the Massachusetts Institute of Technology. In 1996 he moved to Princeton University, where he is now working as a Professor of Physics. From 1994 Altshuler also became a Fellow at the NEC Research Institute.