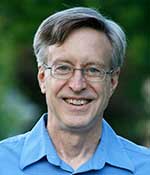 
"For highly significant and sustained contributions to quantum electrodynamics calculations, including the physical properties of positronium, and for tireless and profound commitment to involving undergraduates in theoretical physics research."


Gregory Adkins earned his B.A. degree in mathematics and physics in 1975 and his Ph.D. in physics in 1981, all from UCLA. He is currently the William G. and Elizabeth R. Simeral Professor of Physics at Franklin & Marshall College. He held a postdoctoral position at Princeton University and then joined the faculty of F&M in 1983. While at Princeton and in his early years at F&M, he contributed to the development of the Skyrme Model of nucleons. Since then, he has led a sustained program of study and calculation to elucidate the properties of positronium and has involved numerous undergraduates as collaborators in that work. He received the Bradley R. Dewey Award for Outstanding Scholarship in 2000 from F&M and the Christian R. and Mary F. Lindback Foundation Award for Distinguished Teaching in 2012. Adkins was elected a Fellow of the APS in 1998.