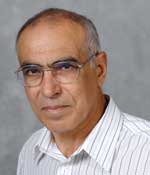 
"For revolutionary, non-invasive spectroscopic techniques to measure magnetic fields in dense plasmas and for resolving in detail in space and time the implosion phase of the Z pinch."