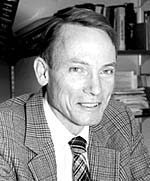 
"For his pioneering contributions to atomic and chemical physics, in particular for his development of optical pumping and laser-polarized noble gases whose uses include nuclear targets and magnetic resonance imaging."


Dr. Happer received his BS degree from the University of North Carolina in 1960 and his Ph.D. in physics from Princeton University in 1964. From 1964 to 1979 he was at Columbia University where he became a full Professor and director of the Columbia Radiation Laboratory. In 1980 he joined the faculty at Princeton University. In 1991 he was appointed by President George Bush to be Director of Energy Research in the Department of Energy. While serving in this capacity, he oversaw a basic research budget of $3 billion, including much of the federal funding for high energy and nuclear physics, materials science, magnetic confinement fusion, environmental science, the human genome project, and other areas. In 1993 he returned to Princeton University and was named Eugene Higgens Professor of Physics and Chairman of the University Research Board in 1995.

Dr. Happer has always had an interest in applied physics as well as basic physics, serving as a scientific consultant to numerous firms and government agencies. From 1987 to 1990 he served as Chair of the Steering Committee of JASON, a group of mostly academic scientists and engineers who advise agencies of the Federal Government on matters of defense, intelligence, energy policy and other technical problems. He is a trustee of the MITRE Corporation, and a founder and co-owner of the Magnetic Imaging Technologies Incorporated (MITI) which specializes in the use of laser polarized noble gases for magnetic resonance imaging and magnetic resonance microscopy. He is a specialist in modern optics, optical and radiofrequency spectroscopy of atoms and molecules, and spin-polarized atoms and nuclei.

He has published over 100 scientific papers, is a Fellow of the American Physical Society, the American Association for the Advancement of Science, and a member of the American Academy of Arts and Sciences and the National Academy of Sciences. He held an Alfred P. Sloan Fellowship and spent six months at the Max-Planck-Institute for Laser Research with the aid of an Alexander von Humboldt Award.