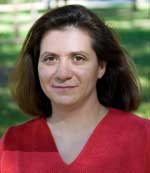 "For her fundamental contributions to the study of the evolution and fate of compact objects in binary systems, focusing on their observations via X-rays and on their importance for gravitational wave detectors."


Vassiliki Kalogera received her Ptihio (B.S.) in physics in 1992 from the University of Thessaloniki in Greece and her Ph.D. in astronomy in 1997 from the University of Illinois at Urbana-Champaign. In 1997 she joined the Harvard-Smithsonian Center for Astrophysics as a CfA Postdoctoral Fellow and she was also awarded the Clay Postdoctoral Fellowship in 2000. Kalogera was appointed Assistant Professor at Northwestern University in the Department of Physics and Astronomy in 2001 and was promoted to Associate Professor in 2006.

An author of over 100 publications, Kalogera's research interests are in the astrophysics of compact objects, in particular their formation and evolution in multiple stellar systems. She studies the physical properties of X-ray binaries, millisecond radio pulsars and double compact objects in our own and other galaxies and works on the theoretical interpretation of current observations of their electromagnetic emission and their anticipated gravitational radiation.

Among Kalogera's awards and honors are the David and Lucile Packard Foundation Fellowship in Science and Engineering, the Cottrell Scholar Award, the NSF CAREER Award in Astronomy, and the AAS-AAUW A.J. Cannon Award. She is an active member of the LIGO Scientific Collaboration, a member of the American Astronomical Society (AAS) and the American Physical Society. She serves on the LIGO Program Advisory Committee and as an elected member of the Executive Committees of the APS Division of Astrophysics, the APS Topical Group on Gravity, and the AAS High Energy Astrophysics Division. She has also served on the Nominating Committee of the APS Astrophysics Division and on the Chandra Users Committee.