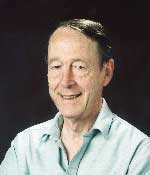 
Tom Kibble was born in Madras, India.  He graduated from the University of Edinburgh (MA 1955, BSc 1956, PhD 1958).  Following a year at Caltech he came to Imperial College London in 1959, joining the group led by Professor Abdus Salam.  He was appointed to the faculty as a Lecturer in 1960, and promoted to Professor in 1970.  He was Head of the Imperial College Physics Department from 1983 to 1991, and since 1998 has been a Senior Research Fellow and Emeritus Professor of Theoretical Physics.  Dr Kibble spent a year in 1967-68 at the University of Rochester, Rochester, NY, and in 2007 was Lorentz Professor at the University of Leiden, Netherlands.  His primary interests are in quantum field theory and cosmology, especially formation and properties of topological defects such as cosmic strings and analogs in condensed matter.  Dr Kibble is a Fellow of the Royal Society, of the Institute of Physics, and of Imperial College London, a member of the American Physical Society, the European Physical Society and the Academia Europaea, and a CBE.  He has been awarded the Hughes Medal of the Royal Society and the Rutherford and Guthrie Medals of the Institute of Physics.