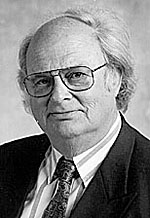 
"For his broad contributions that have provided new understanding of the dynamics of atomic interactions with ions, electrons and photons at energies ranging from a fraction of a milli-electron volt to many trillion electron volts."

In 1951, he began work on the application of molecular beam techniques to the study of chemically reactive collisions. The result of this study helped to lay the foundation for the present field of chemical dynamics. In 1964, he initiated work on the channeling energetic heavy ions of crystals that led to the determination of crystal potentials and of states of ions penetrating solids. In 1978, he helped to initiate work on radiation from channeled of relativistic positrons and electrons, which yield line radiation in the X-ray region. In 1981, he initiated the first measurements of dielectronic recombination of multicharged ions. In 1990, he initiated studies of atomic collisions at ultrarelativistic energies at CERN and, in 1992, he initiated studies of molecular ion dissociative recombination in ion storage rings.

Dr. Datz was appointed Union Carbide Corporate Fellow in 1979 and Lockheed-Martin Senior Corporate Fellow in 1988. He was appointed Guest Professor at the FOM Institute for Atomic and Molecular Physics in Amsterdam (1962-63); Aarhus University, Denmark (1970-71); University of Chicago (1972); Max-Planck Institute for Plasma Physics (1974); Texas A&M University (1981); and the Universit_ Pierre et Marie Curie, Paris (1985). He was awarded the Swedish Tage Erlander National Science Professorship for 1990-91. In 1997, he was awarded Doctor Honoris Causis by Stockholm University. Dr. Datz is a Fellow of the APS and the AAAS.