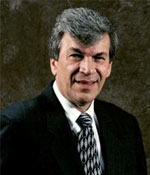 
Ronald C. Davidson has been Professor of Astrophysical Sciences at Princeton University since 1991, and was Director of the Princeton Plasma Physics Laboratory from 1991-1996. He received the B.Sc. degree from McMaster University in 1963, and the Ph.D. degree from Princeton University in 1966. He was Assistant Research Physicist at the University of California at Berkeley from 1966-1968, member of the Physics Department faculty at the University of Maryland from 1968  1978, and Professor of Physics at the Massachusetts Institute of Technology from 1978-1991. Dr. Davidson has made numerous fundamental theoretical contributions to several areas of pure and applied plasma physics, including nonneutral plasmas, nonlinear effects and anomalous transport, kinetic equilibrium and stability properties, intense charged particle beam propagation in high energy accelerators, and coherent radiation generation by relativistic electrons. He is the author of more than three hundred and fifty journal articles and books, including four advanced research monographs on nonlinear plasma dynamics, nonneutral plasmas, and high energy accelerators. Professor Davidson served as Director of the MIT Plasma Fusion Center from 1978-1988, and as Chair of the American Physical Societys Division of Plasma Physics during 1983-1984, and the Division of Physics of Beams during 2001-2002. He is a member of the National Academies Board on Physics and Astronomy, and has participated in numerous National Research Council panels, and national and international committees on physics research. Dr. Davidson is a Fellow of the American Physical Society, and a Fellow of the American Association for the Advancement of Science. He is also a recipient of the Department of Energys Distinguished Associate Award and the Fusion Power Associates Leadership Award, both in 1986, and recipient of The Kaul Foundation's Award for Excellence in 1993, and the IEEE Particle Accelerator Science and Technology Award in 2005.