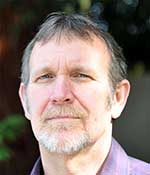 
"For his sustained, groundbreaking work in photonics and optics, especially applied to the integration of optical and electronic computing and information processing."


Raymond G. Beausoleil, Ph.D., is a Hewlett Packard Enterprise (HPE) fellow in systems research at Hewlett Packard Labs, and a consulting professor of applied physics at Stanford University (Palo Alto, Calif,). At HPE, he leads the Large-Scale Integrated Photonics research group, and is responsible for research on the applications of optics at the micro- and nanoscale, to high-performance classical and quantum information processing. Dr. Beausoleil’s current projects include photonic interconnects for exascale computing, and low-power complex nanophotonic circuits. Dr. Beausoleil received his B.S. in physics from the California Institute of Technology (Pasadena), graduating with honors in 1980. He received his M.S. and Ph.D. in 1984 and 1986 from Stanford University (Palo Alto, Calif.), where he was  a member of the physics research group led by Nobel Prize winner Theodor Wolfgang Hänsch. In 1996, Dr. Beausoleil became a member of the technical staff at HP Laboratories. Among his early accomplishments at HP is the invention of optical paper-navigation algorithms incorporated into the HP/Agilent optical mouse, and now HP`s large-format printers. Dr. Beausoleil has published over 300 papers, conference proceedings, and five book chapters. A fellow of the American Physical Society, Dr. Beausoleil has over 115 patents issued, and over three dozen pending.