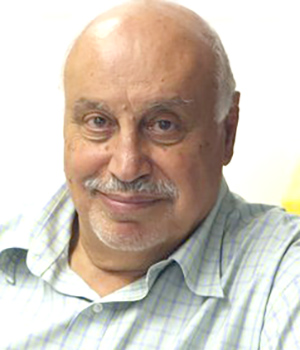 
"for far-ranging, high-impact contributions to nanoscale science using electron microscopy, and for his mentorship and promotion of Latinos in physics, ranging from undergraduates to faculty."


Miguel José Yacamán received his B.S., M.Sc., and Ph.D. from the National University of Mexico (UNAM). He spent a year in Cambridge and Warwick working on his Ph.D. dissertation, and did postdoctoral stays in Oxford (1976) and Nasa Ames, California (1978). He became director of the Institute of Physics UNAM in 1983. Later, he was the scientific director of CONACYT and the Nuclear Institute of Mexico. In 2000, he was appointed a distinguished professor at the University of Texas at Austin, and in 2008, to the University of Texas at San Antonio. He has published 550 papers in scientific journals and eight books, and has been granted five patents, directing more than 50 Ph.D. theses and mentoring about 150 postdocs. The scope of his research is very broad, including nanoparticles, carbon nanotubes, quasicrystals, catalysis, and crystal structure, among other research areas. He developed the first method to determine the shape of nanoparticles using weak diffracted beams. This technique has been used to characterize particle catalysts. Dr. Yacamán was the first to show that nanoparticles can be described in terms of a crystal structure different from the bulk, and found the first catalytic method to produce carbon nanotubes using nanoparticles. This method became the standard method to produce carbon nanotube. He is a recipient of The Materials Society Robert Franklin Mehl Award, an American Physical Society John Wheatley Award, the 1997 Institute of Metals Lecture, the Research Prize from The Mexican Academy of Sciences, among other honors.