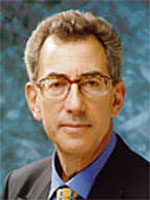 
"For ground breaking contributions to computational physics by developing methods to carry out atomistic simulations of molecular systems thereby generating novel insights into the structural and dynamical behavior of complex materials."

In 1968 he moved to the Chemistry Division of the NRCC in Ottawa, Canada, where he remained for 19 years, rising from Associate Research Officer to Principal Research Officer. During this period he was also Adjunct Professor at the University of Waterloo (1977 - 1983) and Professor of Chemistry (part-time), at McMaster University (1977-1988).