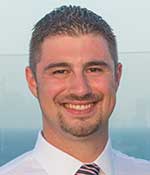 
"For first observations of Rayleigh-Taylor-induced magnetic fields in laser-produced plasmas using both xrays and monoenergetic 14.7 MeV protons to accurately measure the amplitude and evolution of the induced fields."


Mario Manuel grew up in Spanaway, Washington and attended the University of Washington, Seattle, where he graduated from in 2006 with B.S.'s in Aerospace Engineering, Physics, and Astronomy. Exposure to scientific research in Giessen, Germany during a Physics Department exchange program, led Mario to seek a graduate education in experimental research.

Mario attended the Massachusetts Institute of Technology where he earned a S.M. in Aerospace Engineering (2008) and his Ph.D. in Applied Plasma Physics (2013) through the High Energy Density (HED) Physics Division, led by Dr. R. D. Petrasso, of the Plasma Science and Fusion Center. Mario's dissertation research focused on the development of a monoenergetic proton radiography system to make the first experimental measurements of magnetic fields induced by Rayleigh-Taylor growth in laser-produced plasmas.

In 2013, Mario was awarded an Einstein Fellowship, through the Harvard-Smithsonian Center for Astrophysics, to 'Explore Astrophysical Hydrodynamics in the Laboratory'. Currently working with Dr. R. P. Drake's group at the University of Michigan, Mario is focusing his research on the dynamics of magnetized outflows in accretion systems and radiation-hydrodynamic interactions of stellar winds in supernova progenitors. Mario has been an APS DPP member since 2006.

With present-day high-power laser facilities, astrophysically-relevant HED plasma environments may be readily created in a controlled laboratory setting. Many astrophysical systems can be properly scaled and reproduced at these facilities thereby providing a new experimental window in which to probe these phenomena and directly compare to numerical models. Mario will continue promoting the field of laboratory astrophysics and hopes to encourage other scientists to think about their astrophysical systems and whether some piece of physics may be recreated in the lab.