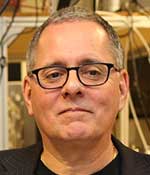 
Louis F. DiMauro, Ph.D., is professor of physics and the Edward and Sylvia Hagenlocker Chair at The Ohio State University (Columbus). He received his B.A. in 1975 from Hunter College, the City University of New York, and his Ph.D. from the University of Connecticut (Storrs) in 1980 and was a postdoctoral fellow at the State University of New York, Stony Brook, before arriving at AT&T Bell Laboratories near Summit, New Jersey, in 1981. Dr. DiMauro joined the staff at Brookhaven National Laboratory in Upton, New York, in 1988 rising to the rank of senior scientist. In 2004 he joined the faculty at OSU, the same year he was awarded the Brookhaven National Laboratory/Brookhaven Science Associates Science & Technology Prize, the 2012 OSU Distinguished Scholar Award, and the 2013 Optical Society (OSA) Meggers Prize. Dr. DiMauro is a fellow of the American Physical Society, the OSA, and the American Association for the Advancement of Science. He has served on numerous national and international committees, government panels, served as the 2010 APS Division of Atomic, Molecular and Optical Physics chair and vice-chair of the National Academy of Sciences Committee on Atomic, Molecular and Optical Sciences. His research interest is in experimental ultra-fast and strong-field physics. In 1993, Dr. DiMauro and his collaborators introduced the widely accepted semiclassical model in strong-field physics. His current work is focused on the generation, measurement, and application of attosecond X-ray pulses, and the study of fundamental scaling of strong field physics.