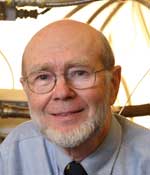 
"For vibrational spectroscopy in cryogenic matrices that combined with quantum calculations, has led to the identification and characterization of many molecules, ions, and complexes across the periodic table."