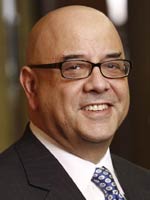 
"For outstanding contributions to the fundamental understanding of chaotic mixing in laminar flows, to mixing and segregation in granular flows and for ground-breaking experimental work that has led to the broad application of these concepts."


Dr. Julio M. Ottino is currently Dean of the Robert R. McCormick School of Engineering and Applied Sciences at Northwestern University and holds the titles of Distinguished Robert R. McCormick Institute Professor and Walter P. Murphy Professor of Chemical and Biological Engineering. He was the founder and co-director of the Northwestern Institute on Complex Systems and was Chairman of the department of Chemical and Biological Engineering during 1992-2000. Ottino's research has appeared on the covers of and Nature, Science, Scientific American, the Proceedings of the National Academy of Sciences of the US and other publications and has impacted fields as diverse as fluid dynamics, granular dynamics, microfluidics, geophysical sciences, and nonlinear dynamics and chaos. He is an Advisor to Unilever, was a member of the Technical Board of Dow Chemical, and was a member of the International Review of Engineering in the UK. Dr. Ottino received several national awards including the Alpha Chi Sigma Award and William H. Walker of the American Institute of Chemical Engineers and has given numerous named lectureships, including the Lacey Lectures at Caltech, the Corrsin Lecture in Johns Hopkins, the Pirkey Lecture at Texas, and the Danckwerts Lecture in England. He has been a Guggenheim Fellow and a Sigma Xi Lecturer, and is a Fellow of the APS, a Member of the National Academy of Engineering and the American Academy of Arts and Sciences.