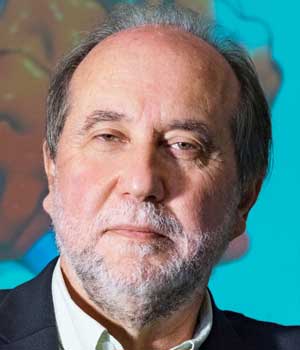 
"For independent contributions to a new view of protein folding, from the introduction and exploration of simple models, to detailed confrontations between theory and experiment."


José Onuchic is the Harry C & Olga K Wiess Professor of Physics and Astronomy, Chemistry and Biosciences at Rice University, and co-director of the Center for Theoretical Biological Physics, sponsored by the National Science Foundation. His research considers theoretical methods for molecular biophysics and gene networks, and he has introduced the concept of protein folding funnels. Energy landscape theory and the funnel concept provide the framework needed to pose and to address the questions of protein folding and function mechanisms. He developed the tunneling pathways concept for electron transfer in proteins, and is also interested in stochastic effects in genetic networks with applications to bacteria decision-making and cancer. Currently he is modeling the 3D-structure of the genome. Onuchic was elected to the National Academy of Sciences in 2006 and received the 1988 International Centre for Theoretical Physics Prize in honor of Heisenberg in Trieste, Italy, and the 1992 Beckman Young Investigator Award. He is a fellow of the American Physical Society, the American Academy of Arts and Sciences, the Brazilian Academy of Sciences, the Biophysical Society, and the American Association for the Advancement of Science 2017. He was awarded the 2011 Einstein Professorship by the Chinese Academy of Sciences. In 2014, he received the Diaspora Prize from the Brazilian Government, and in 2015, he was awarded The International Union of Biochemistry and Molecular Biology Medal.