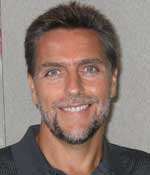 
"For his seminal contributions to the rheology of "complex fluids", for creating the Stokesian Dynamics technique for predicting the macroscopic properties of concentrated supensions under shear, and for his services to Fluid Dynamics as Associate Editor and Editor, respectively, of two top journals."


John F. Brady is the Chevron Professor of Chemical Engineering and Professor of Mechanical Engineering at the California Institute of Technology.  He received his BS in chemical engineering from the University of Pennsylvania in 1975, which was followed by a year at Cambridge University as a Churchill Scholar.  He received both an MS and PhD in chemical engineering from Stanford University, the latter in 1981.  Following a postdoctoral year in Paris at ESPCI, he joined the Chemical Engineering department at MIT.  Dr. Brady moved to Caltech in 1985.
Dr. Brady’s research interests are in the mechanical and transport properties of two-phase materials, especially complex fluids such as biological liquids, colloid dispersions, suspensions, porous media, etc.  His research combines statistical and continuum mechanics to understand how macroscopic behavior emerges from microscale physics.  He is the co-inventor of the Stokesian Dynamics technique for simulating the behavior of particles dispersed in a viscous fluid under a wide range of conditions.
Dr. Brady has been recognized for his work by several awards, including a Presidential Young Investigator Award, the Professional Progress Award of the American Institute of Chemical Engineers and the Bingham Medal of the Society of Rheology.  Dr. Brady served as an associate editor of the Journal of Fluid Mechanics and editor of the Journal of Rheology.  He is a fellow of the American Physical Society and a member of the National Academy of Engineering.