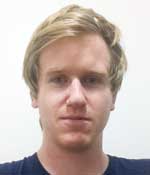 
Ian Moult, Ph.D., is a theoretical particle physicist whose research focuses on effective field theories for the Large Hadron Collider at CERN in Geneva, Switzerland. He received his B.Sc. from the University of British Columbia (Vancouver) in 2011 and his Ph.D. from Massachusetts Institute of Technology (Cambridge) in 2016, under the supervision of Iain Stewart, Ph.D. In his doctoral dissertation, Dr. Moult developed novel techniques to characterize and calculate the substructure of jets, leading to a powerful method to identify boosted electroweak bosons, and he also introduced new helicity operator methods to study quantum interference effects involving the Higgs boson. He was a postgraduate fellow of the Natural Sciences and Engineering Research Council of Canada from 2012 to 2015, and he was the recipient of an Andrew M. Lockett Memorial Fund Award for Graduate Research at MIT in 2015. Dr. Moult
is currently a postdoctoral research associate at the University of California, Berkeley, and Lawrence Berkeley National Laboratory, where he continues to use effective field theory techniques to push the boundaries of quantum chromodynamics and collider physics.