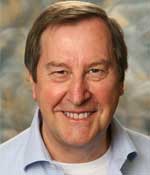 
"For Pioneering, and seminal contributions to, the field of dusty plasmas, including work leading to the discovery of plasma crystals, to an explanation for the complicated structure of Saturn's rings, and to microgravity dusty plasma experiments conducted first on parabolic-trajectory flights and then on the International Space Station."


Gregor Morfill received his B.Sc. degree in physics and his Ph.D. in space plasma physics from Imperial College, London University, in 1967 and 1970, respectively.

After research appointments at Max Planck Institute for Extraterrestrial Physics (MPE), Garching, and Max Planck Institute for Nuclear Physics, Heidelberg, he was appointed Director at MPE in 1984. He holds honorary professorships at the University of Leeds (United Kingdom) and the University of Arizona, Tucson (U.S.A.). In 2003 he received an Honorary Doctorate from the Technical University of Berlin (Germany), in 2010 he was awarded Fellow of the Institute of Physics (United Kingdom) and in 2011 he was appointed into the Scientific Council of Bauman University, Moscow.

He is the author of more than 500 scientific papers. His current scientific interests are mostly focused on complex (dusty) plasmas – theory, laboratory and experiments on the International Space Station (continuously since the start of the ISS), planetary and astrophysical plasmas, and plasma applications in hygiene and medicine.

Professor Morfill is a foreign member of the Russian Academy of Sciences. He is the recipient of a number of important prizes and awards including the Patten Prize, Bavarian Innovation Prize, Wissenschaftpreis of the German “Stifterverband”, ERC research grant, Gagarin Medal, Ziolkowski Medal, NASA achievement awards, URGO Foundation for Advances in Dermatology Award (plasma treatment of chronic wounds).