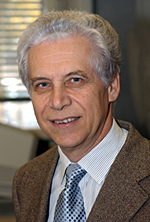 
"For his pioneering discoveries in dual resonance models which, partly through his own efforts, have developed into string theory and a basis for the quantum theory of gravity."


Venziano was born in Florence, Italy. He pursued his undergraduate education took place at the University of Florence, where he received my Laurea in Physics in 1965. He continued with graduate studies at the Weizmann Institute of Science, Rehovot, Israel, where he received a Ph. D. in physics in 1967. He was research associate and then visiting professorship at MIT from 1968 to 1972. In 1972, he returned to the Weizmann Institute as fuIl Professor and became its Amos-de ShaIit Professor of Physics in1975. Since 1978 he has been a permanent member of the Theoretical Physics Division at CERN, Geneva, which he headed from 1994 to 1997. He has also held many visiting positions while at CERN e. g. the Chaire Condorcet at the Ecole Normale Superieur, Paris, in 1994, and the Chaire Blaise Pascal, at Orsay and IHES, from 2000 to 2002.

In 1996 he became a member of the Accademia Nazionale dei Lincei and in 2002 he was nominated foreign member of the Academie des Sciences de I'Institut de France, Paris. In 1999 he was awarded the I. Ya. Pomeranchuk Prize in theoretical physics, at ITEP, Moscow; the year after he received a Gold Medal of the Italian Republic for special merits in science and culture. He is the author of over 200 scientific publications. His early research was on Dual Resonance Models, the precursor of String Theory, work for which I was given this award. Then he turned his attention to quantum field theories, in particular to quantum chromodynamics and nonperturbative properties of supersymmetric theories. Since 1986 he has returned to string theory and, in particuIar, to its cosmological implications. He has initiated a new approach to cosmology, the so-called pre-big bang scenario, in which the big bang, instead of being the beginning of time, is the result of a long preceding evolution.