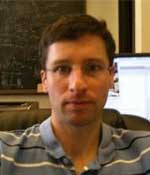 
"For his brilliant computational solution of a fundamental problem in Einstein's theory of General Relativity, the collision of two black holes, with implications for fundamental physics, astrophysics, and gravitational wave observations."


Frans Pretorius received his undergraduate degree in computer engineering from the University of Victoria, British Columbia, in 1996, and a M.Sc. in Physics at the same institute under the supervision of Werner Israel in 1999. Pretorius completed a Ph.D. in Physics, supervised by Matthew Choptuik, at the University of British Columbia in 2002. For his thesis work, Pretorius was awarded the 2003 Nicholas Metropolis Award by the APS. Pretorius was the Richard Chase Tolman Postdoctoral Fellow at the California Institute of Technology from 2002-2005, an Assistant Professor of Physics at the University of Alberta from 2005-2007, and is presently an Assistant Professor of Physics at Princeton University.

Pretorius' main area of research is Einstein's theory of general relativity. His work has included studies of gravitational collapse, cosmic singularities, and binary black hole mergers. His latest efforts have focused on high speed black hole collisions (of relevance to putative black hole formation scenarios at the Large Hadron Collider), and the structure of gravitational waves emitted by compact object mergers in the universe.

Pretorius is currently an Alfred P. Sloan Fellow, and serves on the Executive Committee of the Topical Group in Gravitation (GGR) of the APS.