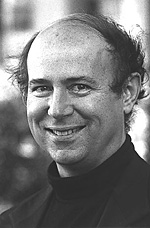 
"For his role in the development of asymptotic freedom and other aspects of quantum chromodynamics, a cornerstone of the standard model; for his remarkable versatility in research in condensed matter and astrophysics as well as particle physics; and for his outstanding ability to lecture and write with clarity, profundity, and enthusiasm."


Frank Wilczek is considered one of the world's most eminent theoretical physicists. He is known, among other things, for the discovery of asymptotic freedom, the development of quantum chromodynamics, the invention of axions, and the discovery and exploitation of new forms of quantum statistics (anyons). When only 21 years old and a graduate student at Princeton University, in work with David Gross he defined the properties of color gluons, which hold atomic nuclei together.

Wilczek received his B.S. degree from the University of Chicago and his Ph.D. from Princeton University. He taught at Princeton from 1974 to 1981. During the period 1981 to 1988, he was the Chancellor Robert Huttenback Professor of Physics at the University of California at Santa Barbara, and the first permanent member of the National Science Foundation's Institute for Theoretical Physics. In the fall of 2000, he moved from the Institute for Advanced Study, where he was the J.R. Oppenheimer Professor, to the Massachusetts Institute of Technology, where he is the Herman Feshbach Professor of Physics. He has been a Sloan Foundation Fellow (197577) and a MacArthur Foundation Fellow (198287). He has received UNESCO's Dirac Medal, the American Physical Society's Sakurai Prize, the Michelson Prize from Case Western University, and the Lorentz Medal of the Netherlands Academy for his contributions to the development of theoretical physics. He is a member of the National Academy of Sciences, the Netherlands Academy of Sciences, and the American Academy of Arts and Sciences, and is a Trustee of the University of Chicago. He contributes regularly to Physics Today and to Nature, explaining topics at the frontiers of physics to wider scientific audiences.