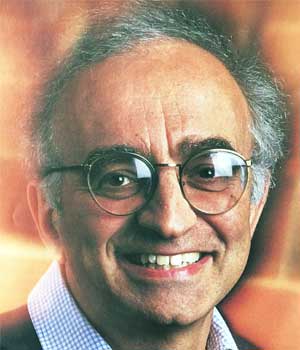 Boris I. Shklovskii
University of Minnesota


Boris Shklovskii earned his master’s degree in physics from the University of Leningrad in 1965 and his Ph.D. in physics from the Ioffe Institute in 1968 working on the theory of sound
absorption in insulators. From 1966 until 1989 he worked in the Ioffe Institute on electronic properties of doped semiconductors. Together with Alexei L. Efros, he applied percolation ideas to the Miller-Abrahams resistor network and calculated hopping conductivity as a function of temperature, magnetic field, voltage, strain and concentration of impurities. In 1975, Shklovskii and Efros revised Mott’s theory of the variable range hopping showing that electron-electron interactions create the soft Coulomb gap at the Fermi level and change the power of temperature in exponential factor of hopping conductivity. They also showed that electron-electron interaction modifies Mott-Berezinskii’s theory of high frequency conductivity of disordered systems. Their work was summarized in the monography published by Springer in 1984. In 1986, this work was awarded the USSR’s Landau Prize of Academy of Science. Shklovskii joined the faculty of the University of Minnesota and the William Fine Theoretical Physics Institute as Fine Professor of Physics in 1989. Working on the theory of Quantum Hall Effect, he predicted new stripe and bubble ground states of electron gas at higher Landau levels, which were soon discovered in GaAs. He also applied ideas of the low temperature physics to biologically motivated problems of interaction of large charges in water. His theory explained the counterintuitive phenomenon of charge inversion widely used for DNA in gene therapy. His recent research focuses on electron transport in semiconductor nanocrystal arrays, topological insulators, and oxide heterojunctions. He is a fellow of
the American Physical Society.