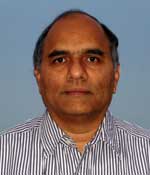 Dr. Shastrys PhD was in itinerant electron magnetism and quantum spin systems in low dimensions, these topics continue to fascinate him to date. At Utah he started a collaboration with Dr. Bill Sutherland on solvable models. At T.I.F.R., he worked on the integrability of the 1-d Hubbard model, and the magnetism of metals. At Princeton, he worked on the Gutzwiller type wave functions, and on rigorous theorems for long ranged order in quantum statistical mechanics. At the Bell Laboratories, he developed theories for understanding Nuclear Magnetic Relaxation, the Hall constant and Raman scattering in High Tc systems. At IISc he worked on Spin Ice, and on the problem of superconductivity in purely repulsive models. His current interests include thermoelectric effects in strongly correlated systems such as sodium cobaltate.