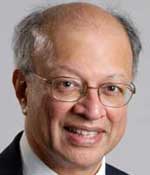 
"For applying physics to a variety of social problems and developing sustainable energy, environmental and public health technologies, as well as demonstrating how these could be scaled up, thus contributing to improved life for millions."


Ashok Gadgil has a doctorate in physics from UC Berkeley. He is Director of the Environmental Energy Technologies Division of Lawrence Berkeley National Laboratory, and a Professor of Civil and Environmental Engineering at UC Berkeley. He has substantial experience in technical, economic, and policy research on energy efficiency and its implementation — particularly in developing countries. For example, the utility-sponsored compact fluorescent lamp leasing programs that he pioneered are being successfully implemented by utilities in several east-European and developing countries. He has several patents and inventions to his credit, among them the "UV Waterworks," a technology to inexpensively disinfect drinking water in the developing countries, for which he received the Discover Award in 1996 for the most significant environmental invention of the year, as well as the Popular Science award for "Best of What is New – 1996". In recent years, he has worked on ways to inexpensively remove arsenic from Bangladesh drinking water, and on fuel-efficient stoves for Darfur.

Dr. Gadgil has received several other awards and honors for his work, including the Pew Fellowship in Conservation and the Environment in 1991 for his work on accelerating energy efficiency in developing countries, the World Technology Award for Energy in 2002, the Tech Laureate Award in 2004, the Heinz Award in 2009, the European Inventor Award in 2011. He serves on several international and national advisory committees dealing with energy efficiency, invention and innovation, and issues of development and the environment. He is also a member of the STAP roster of experts of the Global Environmental Facility. In the 2004-5 academic year, Dr. Gadgil was the MAP/Ming Visiting Professor in Civil and Environmental Engineering at Stanford University.

At Lawrence Berkeley National Laboratory, Dr. Gadgil is part of a group of researchers conducting experimental and modeling research in Indoor Airflow & Pollutant Transport. He has authored or co-authored more than 85 papers in refereed archival journals and more than 100 conference papers.