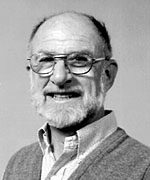 
"For a broad range of theoretical and conceptual advances in particle beam dynamics, leading to important accelerator performance improvements; for contributions in the areas of synchrotron rings, including negative mass instability and resistive wall instability, and free electron lasers; for the two-beam accelerator concept; for helping shape the very language of beam physics; and for inspiring and guiding several generations of accelerator scientists and serving as a statesman of science."


Dr. Sessler received his Ph.D. from Columbia University in 1953. In 1961 he joined the Lawrence Berkeley National Laboratory where he was instrumental in initiating an Energy and Environmental program. He served as Director of LBNL from 1973 - 1980. He presently is a Distinguished Senior Staff Scientist in the Accelerator Fusion Research Division.

Dr. Sessler has written and published approximately 275 manuscripts. He was Chair of the Federation of American Scientists (1988 - 1991). He received the E.O. Lawrence Award (1970) and the US Particle Accelerator School Prize (1988). He is a fellow of the APS, The AAAS and the New York Academy of Sciences. He is a member of the National Academy of Sciences. He has been active in human rights matters, being one of the co-founders of the Sakharov, Orlov, and Shcharansky (SOS) society, and was the first recipient of the APS Nicholson Medal for Humanitarian Service (1994). Dr. Sessler has served as a member of numerous committees, councils and panels. Currently, he is the President-Elect of the American Physical Society.